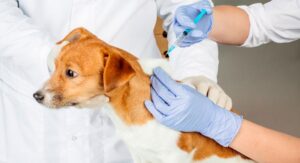 What do they cover for?

In the UK we routinely vaccinate our dogs against four core diseases – distemper, hepatitis, parvovirus and leptospirosis. But what are these diseases and what do they do?

Distemper is a very aggressive virus that starts with runny eyes and nose before quickly progressing to pneumonia, seizures and muscle stiffness. It transmits easily from dog to dog and cases are often fatal. In the UK we are fortunate that it is now very rare – this is due to vaccination. There is no treatment for distemper but prevention with vaccination is very effective.

Infectious Hepatitis is a contagious viral disease which causes fever, liver failure and often death. Again there is no treatment, only prevention. Thanks to vaccination, this is also extremely rare in this country.

Parvovirus or “parvo” is probably the contagious disease we hear most about, largely because we still see a fair number of cases in the UK. Parvo is highly contagious and can spread quickly amongst unvaccinated dogs, but is most often seen in puppies under 6 months. This is because they have a more immature immune system and, depending on their age, may not have started vaccinations yet. The virus attacks the bodies own intestine cells, preventing the absorption of nutrients and causing diarrhoea, depression and often death.

Leptospirosis is a bacterial infection which is transmitted via contaminated water. It can attack different organs within the body, most commonly the kidneys and liver. It can cause severe vomiting and diarrhoea, jaundice and dehydration. As it is the only of these four diseases to be caused by a bacteria rather than a virus, in theory, this means we can treat lepto with antibiotics. However, by the time of diagnosis so much damage has often been done that antibiotics are too late. It is also a zoonotic disease, which means it can affect humans too! There are several strains of leptospirosis in this country – historically we saw mostly two strains in the UK, but over recent years we have begun to see the emergence of two different strains. For this reason, we are in the process of updating our vaccines from “Lepto 2”, which covers the two original strains, to “L4” which covers both the original and the newer strains of lepto.

Kennel cough vaccine is also recommended but is not part of the “core” vaccinations as it is more relevant for some dogs than others. However, despite the name, it is not only dogs who go into kennels that are at risk – those who attend doggy daycare, training classes, agility and even those who just mix with other dogs in the park can contract kennel cough! As the name suggests it causes a very characteristic harsh hacking cough and sometimes a fever. It is caused by a mix of virus and bacteria, so while we can treat the bacterial element with antibiotics, we can only treat the viral part symptomatically and wait for it to pass – an uncomfortable few weeks for your dog!

Why do puppies need a vaccination course rather than a one-off injection?

Puppies are born with some natural immunity from mum, which is boosted further by suckling colostrum or “first milk”. What immunity they get will obviously depend on what immunities mum has at this time and the levels may be different for each pup. We aim to start vaccines at 8 weeks as this is when we tend to see maternal immunity starting to fall in the pups, however, any immunity left will interfere with the vaccine. This is why pups need a second vaccine to boost immunity in a few weeks. We then give a full vaccine 12 months later to make sure immunity is fully topped up.

What if my pet is unwell when their vaccinations are due?

For dogs to form an effective response for vaccination, they need to be well and not suffering from any acute illness. This is to ensure their immune system can concentrate its efforts on forming a protective immunity to the vaccines, rather than fighting disease elsewhere in the body. In fact, if the immune system is busy trying to fight infection and we ask it to respond to a vaccine as well, we might cause enough of distraction that the infection can start to win! This is why we will always ask you how your pet is prior to vaccinating and perform a full health check to ensure we are not missing anything.

Do we really need to give all these vaccines every year?

The short answer is… NO! How often we give vaccines depends on how long the immunity has been proven to last on all dogs. In the case of the viruses causing distemper, hepatitis and parvo, the immunity lasts for 3 years once they have had their first adult booster. This is because the body’s immune system produces a stronger immune response to viral vaccines. However, as leptospirosis is caused by a bacteria immune response is less effective so this portion of the vaccine needs a booster every year. Many dogs will have immunity which outlasts the proven 1 year or 3-year term – but with these diseases being so serious, is it worth the risk? Antibody testing is available if you would rather check on your individual dogs immune status BUT there is no reliable antibody test for lepto so we will always recommend doing this booster annually.

As the saying goes, prevention is better than a cure!

Spread the cost and save money by joining our Pet Health Club.

With pricing starting at just £12 per month, it’s purrrfect for you and your pets!
Pet Health Club

This website uses cookies to improve your experience while you navigate through the website. Out of these cookies, the cookies that are categorized as necessary are stored on your browser as they are essential for the working of basic functionalities of the website. We also use third-party cookies that help us analyze and understand how you use this website. These cookies will be stored in your browser only with your consent. You also have the option to opt-out of these cookies. But opting out of some of these cookies may have an effect on your browsing experience.
Necessary Always Enabled
Necessary cookies are absolutely essential for the website to function properly. This category only includes cookies that ensures basic functionalities and security features of the website. These cookies do not store any personal information.
Non-necessary
Any cookies that may not be particularly necessary for the website to function and is used specifically to collect user personal data via analytics, ads, other embedded contents are termed as non-necessary cookies. It is mandatory to procure user consent prior to running these cookies on your website.
SAVE & ACCEPT
Go to Top