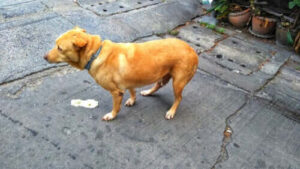 Vomiting is a very common presenting complaint for dogs at the vets, and less commonly cats. It has a number of different causes, including dietary, gastrointestinal blockages and as a sign of internal disease elsewhere in the body. How serious it might be and how we treat it depends on the cause.

Simple vomiting is often caused by a dietary upset, either from eating something they shouldn’t or changing diet too quickly. This tends to be particularly relevant for dogs, especially dogs that are prone to stealing titbits! This may include very fatty foods, food that has gone off, large quantities of human food or non-food items such as cat litter. In cats, the most common cause is hair balls. These can cause gastritis, which is where the lining of the stomach becomes very angry and inflamed. A sudden change from one type of food to another can also cause similar issues, which is why we always recommend changing food over gradually, a little at a time. Dogs with gastritis are often bright and keen to eat, usually either with mild diarrhoea or normal faeces. Gastritis is often mild and only requires treatment to give the stomach lining a break to recover – this includes withholding food for 12 – 24 hours then slowly offering small amounts of bland food such as chicken and rice. They will often also require an anti-sickness injection to break the cycle. If gastritis persists for more than a few days then dehydration is a risk, especially if they are not keeping water down, and they may need a drip to help them recover.

Vomiting can also be caused by a partial or complete blockage in the stomach or intestines. This is a very serious problem, as if left untreated it can cause internal rupture, which causes life-threatening infection in the abdomen. Blockages can be caused by large fragments of undigestible food items, such as bones or corn on the cob, or non-food “foreign bodies”, like stones, toys, blankets etc. We have even seen bizarre objects like wine corks and hair foils! Generally dogs with a blockage will be more unwell and lethargic, but this is not always the case! They often have a temperature and a painful abdomen but sometimes they can present very similar to gastritis, which is why a thorough physical examination is so important to tell the two apart! If a foreign body is suspected, the vet may decide to xray. This might show up the offending object if its is something solid enough to show up on the film, like a stone or bone, but if it is something soft such as a blanket, we might rely on looking at gas build up around the intestines to give us a hint. If a blockage is found or suspected, the only treatment is to operate to remove the offending object and try to repair any damage that may have been done to the gut.

Sometimes we see vomiting which is not related to the gastrointestinal system at all. This is usually as a result of build up of toxins in the blood stream making the animal feel sick. This can be caused by kidney or liver problems, as these are the two organs responsible for breaking down normal toxins in the body and filtering them out. If these are not working properly, levels of toxins start to build up and causes a feeling of sickness. Exposure to poisons as well as some electrolyte imbalances can also cause vomiting. This tends to be a more common cause of vomiting in older dogs, often accompanied by lack of appetite and lethargy. In these cases, your vet will be likely to offer a blood test to check for potential problems.

As you can see, vomiting can have a number of different causes, each of which requires a different treatment. This is why a thorough vet examination to try and decide which category it falls in to is so important, especially if it has gone on for more than a day or two. This will help us decide on the best course of treatment for your pet to get them back to normal as soon as possible!

Spread the cost and save money by joining our Pet Health Club.

With pricing starting at just £12 per month, it’s purrrfect for you and your pets!
Pet Health Club

This website uses cookies to improve your experience while you navigate through the website. Out of these cookies, the cookies that are categorized as necessary are stored on your browser as they are essential for the working of basic functionalities of the website. We also use third-party cookies that help us analyze and understand how you use this website. These cookies will be stored in your browser only with your consent. You also have the option to opt-out of these cookies. But opting out of some of these cookies may have an effect on your browsing experience.
Necessary Always Enabled
Necessary cookies are absolutely essential for the website to function properly. This category only includes cookies that ensures basic functionalities and security features of the website. These cookies do not store any personal information.
Non-necessary
Any cookies that may not be particularly necessary for the website to function and is used specifically to collect user personal data via analytics, ads, other embedded contents are termed as non-necessary cookies. It is mandatory to procure user consent prior to running these cookies on your website.
SAVE & ACCEPT
Go to Top